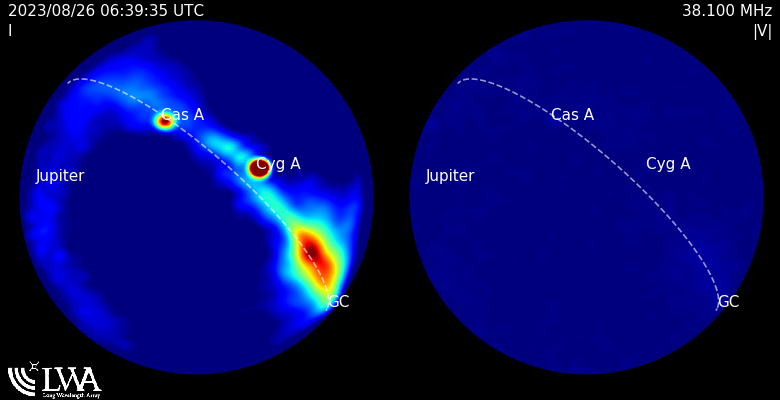 These images show the sky above the second LWA station located on the Sevilleta National Wildlife Refuge. They update every few seconds, and they're typically about 30 seconds old. If the image isn't updating right now, it's probably because we are running beamformed observations, which we do for many hours every day. Check back again soon or check out the original LWA TV.

Each image shows the full sky, down to the horizon at the image's edge. Depending on the current operating mode of the LWA All-Sky Imager experiment, there may be one or two images. If there is one, it shows the total intensity — the power coming from each point on the sky. If there are two, the left will show the total intensity, and the right will show the intensity of circularly polarized radio waves.

At the upper left you can see the average time of the data that went into the image (given in UTC, which is basically the same as Greenwich Mean Time). There is no time gap between the images: we are imaging sky in real time with a 100% duty cycle. At the upper right is the central frequency of the image. In the center is a 100 kHz bandwidth spectrum from a single antenna and polarization; the images are produced from the middle 75 kHz.

Finally, we've labeled the brightest objects in the sky:
Cas A — a supernova remnant
Vir A — a supergiant elliptical galaxy also known as M87
Tau A — the Crab Nebula, a supernova remnant
Cyg A — a bright radio galaxy
Jup — Jupiter, which only can be seen when it is bursting
Sun — the Sun, which can become so bright that it wipes out everything else in the image!
Dashed line — the plane of our galaxy
GC — the center of our galaxy

Of course, there will sometimes be points in our image other than these labeled ones! Most of these are due to radio frequency interference (RFI): radio emissions from sources other than the sky. The sky will sometimes be wiped out by bright RFI, particularly at low frequencies and during the day. However, some blips just may be something new: flares from Hot Jupiters or magnetars; radio counterparts to gamma-ray bursts; or something totally new and unexpected. Our computers will be monitoring these movies to let us know when something unusual pops up!

Every day, we make a movie showing 24 hours of the sky, compressed down to about 10 minutes of video. Each movie starts at around sunset at the LWA.

To view a video, click the date that you'd like in the calendar. LWA TV only came online recently, so most of the early dates don't have videos. Days with videos have their dates in red and are clickable.

EPO Software: We have an LWATV GUI that facilitates the display of LWA-TV. There are also interactive web pages that help visualize the sky at low frequencies.